Dylan Just Wants to Have Fun: Why I Love LIVE AT BUDOKAN 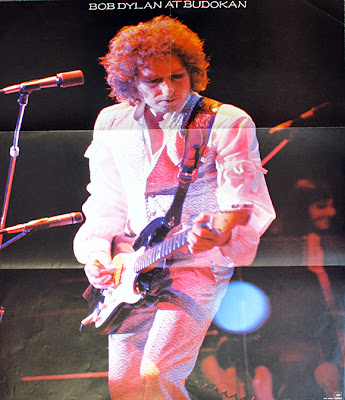 I'm not trying to be ironic and contrary when I say that I love (much of) Bob Dylan Live at Budokan, recorded in the late winter of 1978. When the double album was released, it was pretty much universally panned. People had no idea what this was. Dylan, like most of his generation, was in a no-win situation. The new guard (punk) was in charge, lines were (stupidly) being drawn (mostly by journalists and posers) and the old guard was standing fast with their own, or just losing interest and growing up and out of it. But here was the conundrum that Dylan was facing. After this, you'll see why Budokan, intentionally or not, was a work of absolute genius.

Journalists: "Dylan is a dinosaur and a rich, clueless has-been who was cool when he was young and angry but now he's lame and old and this album proves it. He probably can't even name all four members of The Clash. Oi!!"

Dylan fans: "Bobby is once again going down the wrong road. He was back on the right road a couple years ago, in 73-75, but now he's totally confused and we don't like him having fun and disrespecting  OUR songs. Or wearing eyeliner and glittery suits. It's really hard to feel alienated and smarter than everyone else when listening to this record."

Well...the test of time has shown that this album is pretty fucking classic. Judging from fan reviews, I need not, but  I want to trumpet my love for the sake of two parties:

1) Dylan haters--you just may have found the Dylan album you can dig.
2) Dylan lovers who have been scared to be seen with this album because of its legacy.


I'm very heartened to see that people have grown to love this album.
Let me just give a handful of examples of why this album is great (clicking on the song titles will link to samples):

1) Mr. Tambourine Man--begins like a Television or Talking Heads song, and becomes a joyous rocker, driven by Hammond organ and RECORDER.


2) Love Minus Zero/No Limit--begins just like Elvis' "Burnin' Love", and becomes a joyous romp, powered by congas and RECORDER.

(see what I mean? this is a fun album. he's not here to have his lyrics deconstructed. he makes up new ones on many of these performances anyway. and he's singing quite well).

3) Ballad of a Thin Man--someone's been listening to Bowie's "Station to Station", no? It sure sounds like that to me. But as it builds.... who's chewing out Mr. Jones here? Dylan AND A CHORUS OF FEMALE BACKUP SINGERS.

4) Don't Think Twice, It's Alright.--straight up Jah. A slow skank WITH FLUTE.

(people called this album "Vegas Dylan". If so, that's a pretty punk-ass move if you ask me. I read somewhere that he'd even contacted Neil Diamond's management around this time, after having gone to see Neil perform, and decided felt he wanted some of that MOR fan base. Delusional, yes. But his going Born Again the following year was just as alienating)

5) Oh Sister--this beats the hell out of the DESIRE VERSION, which makes me want to go back in time and TEACH THAT DRUMMER ANOTHER GODDAMN FILL! Really, I can't listen to that song purely because of the drumming. This version is sexy and sleazy. Tom Waits meets Nina Simone--and you KNOW that's a good time.

6) Simple Twist of Fate-- "Here's a simple love story, that happened to me". Whether he's lying or not, it's pretty awesome and "un-Dylan" to introduce a song like this. This is a great song, no matter what. Coincidentally, I've been turned on to a few amazing Jerry Garcia Band versions of this song from this same time period (early 1978).

Here's a hypothesis: Dylan gets weirdest just before he gets into a sober-minded place. Ten years before this, he was writing some goofy--and amazing--songs that ended up on The Basement Tapes, just before writing the dry, serious John Wesley Harding album. And Budokan, as I said before, came just before Dylan went Christian. It's like the week long bender before going into the service.

7) I Want You--you all know the jaunty pop original, yes? The one that sounds a bit like Simon and Garfunkle's "Leaves That Are Green" or "Flowers Never Bend"? Well, here's a serious and slow DIRGE, accompanied only by sparse electric guitar and swelling organ chords. And some emotive singing by Bob.

8) All I Really Want to Do--maybe my favorite thing on the album. I can't help but imagine Dylan performing this surrounded by a dozen Muppets bobbing up and down along to the happy bouncy beat. There's some sax, yes, but not too offensive.

***THE ONE I JUST CAN'T GET WITH:
It's All Right Ma, I'm Only Bleeding--to me, this song is where I kind of side with the Dylan faithful. I mean, there's no topping the original. The Budokan arrangement is not unlike a 7 minute chase scene from your average 70's cop show. I just can't do it.

And that's all I feel is worth covering at the moment. But I will close in saying that this is probably the Dylan album that levels the playing field--and we all know that that is what I'm here to do. Knock those off their high horses and come to the aid who've been trampled by those horses.
Posted by brian at 5:21 PM