...and I was asked to be on the air (93.9 FM Northampton, MA) with Joan Holliday to play ten songs from my personal collection of vinyl. We only got around to nine of them. It was fun, and good to see that I'm not the only one who has become a stranger to the ways of vinyl. The turntable in the studio was a novelty. How quickly we forget! Joan's a veteran DJ (see photo at bottom) and even she made "college DJ" gaffes such as forgetting to put the setting back to 33-1/3 after a 45 rpm tune; or putting the needle down on the wrong track. But it was all part of the fun. Much more real than scrolling and shuffling etc etc. Perfection will kill us all! There's no fun in perfect. Exactitude is necessary in many fields. DJ-ing doesn't have to be one of them.
I used to have many more records, but a few (5?) years ago, a fire destroyed half my vinyl;
and a cash-strapped period last year found me selling back about 20-30 records for a few bucks. I do regret that, even though at the time, I told myself my vinyl days were over and I owned it all digitally anyway.
So, what did I play?
1) Don't Let Me Wait Too Long--George Harrison
2) I'd Love Just Once to See You--The Beach Boys
3) Dirty Back Road--B-52s
4) You're The One Lee--Miracle Legion
5) Cream Puff War--Grateful Dead
6) American Squirm--Nick Lowe
7) Wax Minute--Michael Nesmith
8) Wantin' Ain't Gettin'--The Association
9) Heaven Is Paved With Broken Glass--XTC
WOULD HAVE BEEN NUMBER TEN:
10) This Man He Weeps Tonight--The Kinks
Here's a photo of me (foreground) with Lord Russ (of The Aloha Steamtrain) and Joan Holliday, when we were interviewed on WWUH, Oct 24, 2001.

Then, last night, came School For The Dead's Tenth Anniversary Show....
I have played with dozens of bands over the years, but School For the Dead is the longest musical (or personal, for that matter...so far!) relationship that I've ever consistently been involved in. There are bands that started before (The Figments, The Aloha Steamtrain) who probably will play gigs in the future, but they are rare and momentous occasions. School For The Dead, while not a touring band these days (I think we've toured twice) always has a gig coming up. Henning Ohlenbusch, the singer/songwriter always has a new song to teach us...it's a great band. Great fun. And last night was further proof to me that we're a pretty great band. Henning's songs are always top notch. Max on bass is attentive to my quirks and tendency to change things up ever so slightly. Tony and  Henning share a certain musical bond that is very hard to place. And Ken is always a blast. When Ken and I are both feeling loose, and can hear each other, I end up laughing several times a show when I hear what he's doing at the keyboard. I always feel physically and mentally satisfied after SFTD shows.
The room (the famous Montague Bookmill) was filled to capacity, and the happy vibes and heat made it feel almost otherworldly.
Here's to another 10. No reason to stop now. No sir, none at all.
Here's a clip of the FIRST School For the Dead show.
We're covering Robyn Hitchcock's classic "Egyptian Cream".
For this "one off" show,  Mark Schwaber was our lead guitar player. At the time, Mark and I played together in LoFine.
Now Mark plays with Lloyd Cole.
Lloyd Cole was there the night I played with Robyn Hitchcock. But that's another story.

Really? You want to hear the Robyn Hitchcock story?
Ok, just briefly....A few years later, Henning and I got to play with Robyn H.
Henning had opened for him earlier that evening, then we all went across the street to an open mic. Robyn called me up (never having heard me play) to play some covers. Then Henning, along with Chris Collingwood (Fountains of Wayne) came up to sing some backup. Lloyd Cole was there but didn't take part.
(photo by Debbie Way)

Finally, here's a nice photo by Dennis Crommett (normally known for his songwriting and guitar playing), taken at last night's 10th Anniversary gig. Thanks Dennis! And to everyone who's come to see School For The Dead over the years. 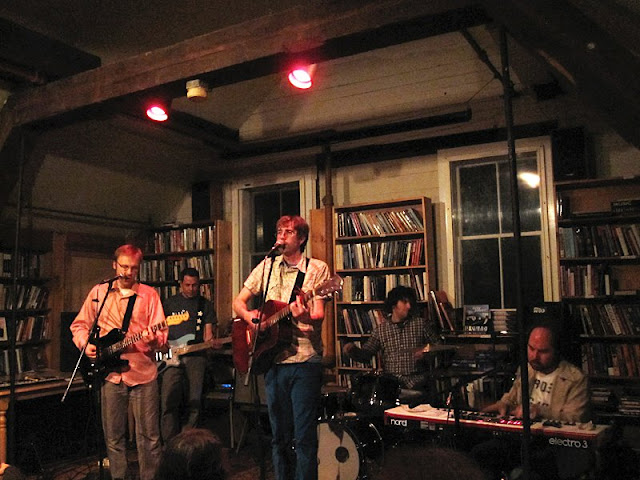