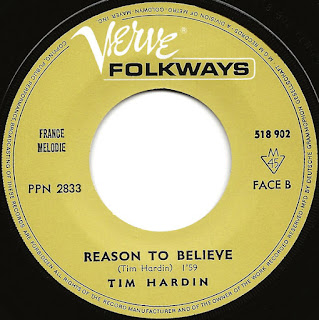 New episode! Note to self: think twice before doing another one with 25+ cover versions. That was a haul.
"Reason to Believe" is a thoughtful and mature Tim Hardin song from 1966 in which the singer is fully aware that he's choosing to carry on a relationship with someone who deals in dishonesty and disrespect. The song's timeless theme struck a chord with many artists (and countless listeners) upon its release, and it was covered by about a dozen artists in 1967 alone. This episode features over 25 versions of this song (spanning from 1966 to 2017) so most aren't played in their entirety. I feel compelled to include some post-production footnotes, as I had a few thoughts once it was too late to include them in the episode. So here are a few things I wished I'd touched on:
1. A mention of Artie Butler and how his string arrangement on the Hardin original was an important component on many subsequent versions; and the many cool ways it was adapted and expanded upon.
2. How the electric piano on the Ian and Sylvia version seems to have influenced a few other versions, including the Carpenters'.
3. How some alternately sing "still I'd LOVE to find a reason to believe".
4. How I mentioned the fusion of Eastern European violin and country fiddle in relation to both Rod Stewart's version and in relation to Camper Van Beethoven's music, but not in relation to each other.
5. How Hal Blaine's drumming on the Scott McKenzie version is magnificent as always.
6. How I can actually see why Doug Dillard wasn't into The Dillards' new direction on Wheatstraw Suite. The fluffy woodwinds on their version of Reason to Believe are a little corny and while Doug obviously didn't object to pop, he wanted to keep things real in his own projects.
Enjoy!

and here are the stars of this episode.....