Neither Gods nor Frauds: Indies Digging the Dead Part 3

"If there is a common thread in the hipster reclamation of the Dead, it is an insistence on filtering them. This is a new way of appreciating Grateful Dead culture."
Jesse Jarnow in the August 2008 issue of Relix

Somehow I missed the article quoted above, as well as the audio/video clips below.  Jarnow's excellent article concerns the new generation of non-Deadhead (or "hipster") Dead fans, as opposed to the stereotypical Deadhead who listens to primarily the Dead or Dead-related music and looks down on most everything else.  It wasn't the article itself that inspired this blog post, but the comments that follow it (it was posted on a jam-band website). You can read them for yourself, but in a nutshell, many of them say things like "Who the fuck cares what those wussy hipsters think? We don't want those posers around.." and blah blah blah.
In other words: Come hear Uncle John's Band...unless you also like 3 minute pop songs and wear skinny jeans. In which case, get lost.
This is troubling, but I will address all that after you dig these groovy clips (which I was turned onto via the Jarnow interview).

Of Montreal--Shakedown Street
“It took me a long time to even give them a listen, ‘cause they had such a stigma in my mind. I was definitely not expecting them to sound like they do.”--Kevin Barnes


Will Oldham (Bonnie Prince Billy/Palace Brothers etc)--Brokedown Palace
“Like many, I fall most fully into the Jerry camp. I’m drawn most specifically to the way Jerry sings and plays, and his work with Robert Hunter and David Grisman, among many others. I learn from his phrasing, from his song choice, from his manner overall.”--Will Oldham


....and this picture of Emily Haines (Broken Social Scene, Metric, Emily Haines & The Soft Skeleton) in a Garcia shirt at a festival gig in Toronto in 2007. 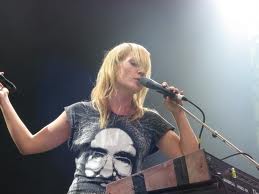 So if you read the whole Relix article, and the comments, you'll notice the disconnect between Dead fans from the indie/punk side and Deadheads from the jam band side (I'm going to go ahead and make the--maybe wrong--assumption that "hipsters" who like the Dead don't want to be referred to as "Deadheads"). The two camps don't exactly see eye to eye. The "hipsters" don't want to be lumped in with unwashed, tie-dyed, dreadlocked, 9-people-3-dogs-and-a-pound-of-weed-stuffed-into-the-microbus Deadheads. And the "real" Deadheads don't want no clean cut hipster telling them that a '73 Dark Star sounds like some indie noise band. Or that Built to Spill have been doing "Ripple" in concert.
Like all things, both sides don't see the whole picture.
Scary how it's like different Christian sects. They worship the same "god" (JC or JG) but would rather stress the differences rather than celebrate the similarities to the other side.
I admit, I like showers, wearing ties and 3 minute songs, and would be very nervous and uptight in a crowded minibus. But I could also listen to the Dead on a 5 hour road trip--preferably alone and not high-- and be happy (as long as it was 1967-78).
I read a quote (in a recent Rolling Stone) by someone in the Dead office that they are looking for the best ways to present the Dead's legacy to new generations who were too young to ever see them live (or worse, to only have seen them in the final two or three years).
I'm not sure the dancing bear video game is the way to go. But I'm also bitter because I actually had a Dead video game idea a couple years ago (but know nothing about how to make video games.)

So there seems to be two camps out there. Those (like me) who want to take the Deadhead group-think aspect out of the band and judge the music on its own merit. Take the subjective, non-musical aspect out of whether a show/song/album was good or not. Take the do-no-wrong fundamentalism out of critiques of the band. Because all that is scary, cult-ish, and flies in the face of the personal freedom that the band espoused. (Though I guess choosing to be a sheep is still a choice).

I can understand wanting to keep the Dead a secret back when they were around, because popularity (post "Touch Of Grey") really did spell the end. They earned their fame, but it wasn't good for them. Jerry Garcia did all he could to deflect all the hero-worship. But to still be cheered when you're obviously in no shape to be in public, let alone singing to 50,000 people, is the point of no return. To be told you sound great when you KNOW you don't really sucks. Especially to someone who probably spent 80% of his waking hours playing music in one form or another.
But now he's 17 years gone, and it's OK to have anyone discover them. There are no gates to crash. No great seats to be taken away from 20-year tour heads by corporate bankers who like "Hell In a Bucket". It's also OK to honestly critique them (but, like anything, not OK to put them down for no real reason).

Reading Dead forums, most folks are funny, witty, intelligent, educated, well-rounded musically and open minded. But there are some whose sexism and racism bleed into their tie dyes, making them truly repulsive. Take those folks out of a "we all agree" Deadhead group, and they wouldn't be able to rationally debate the relative merits of their favorite band.  It's like when conservatives, all fired up from hearing Hannity or Libmaugh's hateful talking points, call into a liberal radio show and have nothing to say when challenged on their opinions. They just repeat their talking points again like a pre-programmed conserva-bot and resort to name calling and personal attacks.
This is nothing new.
But back to the music--I can't believe I just brought up religion and politics. I'm sorry. No, I'm not.

If Brooklyn (or wherever) hipsters are (were? maybe this resurgence is long over) embracing the Dead-- this defunct band of schlubby, stoned San Franciscans from a prior generation-- this means that they are in it for the music. Because they genuinely are curious and open minded.  And "real" Deadheads shouldn't try to belittle them. Because your average hipster is most likely musically very well-educated and well-rounded and has come to appreciate the Dead because they realize their importance in the greater fabric of where music came from, where it is now, and where it's going.
And, like a religious zealot who says The Bible is the only book, some Deadheads, who ONLY listen to the Dead, should not judge anyone else's taste, because they really cannot back up any of their opinions without sounding narrow minded, misguided and ignorant.
Example: someone dissing PETE TOWNSHEND (!!!!) based upon footage of the 20 minutes he spent jamming with the Dead in 1981. Yes, such a critique exists on YouTube. Really? You think Pete Townshend, undisputed genius, doesn't deserve to be on the same stage as The Grateful Dead? Get a goddamn grip.  It's scary. But, like I said, it's the minority fringe.

But this is most likely where many of the "hipsters" are coming from: The Dead can supply a very good musical and historical education if you want it. Look up the original authors of their many cover songs. Look up the historical and literary references in Robert Hunter's lyrics. AND, look up the musicians who admire the Dead or vice versa. Do it all with an open mind. Dead haters will discover the importance of the band outside the Dancing Bears and bumper sticker quotes. And Dead zealots will hopefully loosen their isolationist tendencies.
You'll discover the genius of George Jones, Buddy Holly, Miles Davis and Chuck Berry. Not to mention Rainer Maria Wilke and T.S. Elliot. As well as Suzanne Vega, Warren Zevon, Robyn Hitchcock, Sonic Youth, Will Oldham, Camper Van Beethoven and Of Montreal. Your pallet will grow and evolve. You might develop opinions that are scary to you. Like the realization that Garcia wasn't in fact the best guitar player ever, but that he was undoubtedly the only one of his kind.  Or that Mickey and Billy could be maddeningly sloppy or uninspired, AND that they were often amazing. Or that in the 80's-90's, Bob Weir's guitar tone was the worst in the history of rock, but one listen to his inventive chords and rhythmic patterns in a Dark Star from 1969-74 and you'll hear exactly why he was integral to the band.
Read interviews with Garcia and see that he was talking excitedly about punk (in 1978) and post-punk (in 1981). And that Robert Hunter was saying that he really digs Morrissey's lyrics (in 1988). I wonder: Was this the common opinion of most Deadheads at those times?

Many Deadheads hated "Shakedown Street" when they first heard it, because they were trained to believe "disco sucks". Wow. How about remembering history? Lots of what the Dead were doing, groove-wise, could be lumped in with disco's precursors. "Eyes of the World", "Help On the Way", "Music Never Stopped" are pre-disco, but undoubtedly disco-ready (proven when, in 1977-78, the drummers seemed to play Four-On-the-Floor as often as possible.)  How is Funk OK but Disco so hated? They have the same mom and dad. They just wear different clothes.

I'm speaking to both sides: Uninformed Dead-Haters and Uninformed Everything-But-The-Dead Haters.
Don't be scared to expand your pallet, the two of you! It's like moving to a new part of the world and getting used to the customs. Or going from high school to college. You see your place in the world.  Deadheadism should not mean isolationism. Unless those people in charge of "the legacy" want to keep preaching to the choir and watch the legacy die out with the last generation of those "who were there".
There are legitimate reasons to love and not love the Grateful Dead. It's just the irrational love/hate that drives me nuts.

I think it's all about the greater fabric. And if The Dead can't stand out in that context, that would just mean that they were pretenders, hacks and frauds. Which they weren't. Not gods, but also, not frauds.
Posted by brian at 10:58 AM

Email ThisBlogThis!Share to TwitterShare to FacebookShare to Pinterest
Labels: Grateful Dead Will Oldham Of Montreal