Or at least that's how Mike Nesmith would introduce Davy Jones at Monkees shows during their summer 1967 tour (a bit more flattering than Micky introducing him as "the Velvet-Voiced Midget").

(and by the way, sorry about two death-related posts in a row. if I could prevent such things, I would)

Well, I don't have many words about the guy. I met him once, at a book signing in Worcester, MA in 1993. I stood in line and when it was my turn, his assistant looked at me and said "this guy's got the Mickey hair and the Nesmith sideburns".
Davy looked up at me and said "Don't listen to him. All he does is make a fool of himself"
I replied "Can't take him anywhere, huh?"
Davy said "I can't even take him to bed!"

So that was it. A quick bit of improv comedy with Davy. Not that it made a whole lot of sense, but hey, it was something. My girlfriend at the time took a couple photos but I think I moved out of the way at the last second, so Davy and I weren't in the same frame. I don't have those photos any more.

But the interwebs have MANY photos and video clips of the man, and I'm going to pay tribute to Davy Jones with a hand-picked selection. Enjoy. A huge thank you to the various folks who posted these photos. One who I'm sure is behind many of them is Meghan Brozanic, who runs the Psycho Jello sites on both Facebook and Tumblr. I've spent many hours poking around those sites over the last year or so. Thanks for all your hard work and fandom and sharing your great collection with the world.

So, to start, some cool photos: 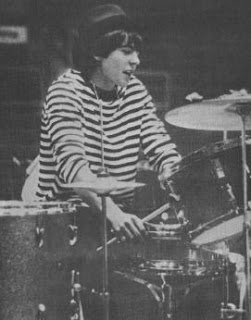 Davy's cool pre-Monkees version of Dylan's "It Ain't Me Babe".  A bit less biting than the original.

Sounds a bit sped-up, but a groovy clip from the second season. They look like they're having fun.

Wow, Davy. Highest guy to ever appear on a family show. Fresh from a session in the famous "Black Box", one would guess.

Nilsson #1: The Monkees' rendition of "Cuddly Toy" enabled Harry Nilsson to quit his day job. Trivia: This was the final studio track to feature all four Monkees playing. Until 1996's reunion album Justus.

Nilsson #2: Davy, solo, with Sam and The Goodtimers, performs Harry's "Together" and then is pretty funny during the interview.


A clip of Davy doing the lovely "French Song" from the 1971 film "Flowers and Lollipops".
Kind of weird. Awkward acting when he sits down during the solo.

A compilation of some of the unscripted interviews at the end of Monkees' episodes.
Davy shows his biting wit in some of these.


And finally, this gut-wrenching scene...Rest In Peace, Davy.

Email ThisBlogThis!Share to TwitterShare to FacebookShare to Pinterest
Labels: Davy Jones The Monkees