I originally posted this four years ago on The Living Rockumentary, but felt it was worth a trotting-out...I've since bought This Awesome Book and This Mostly Awesome Collection, which satiated me for a while. But late summer/early, uh, fall, usually brings about a little Fall resurgence on my part, as ignorant as I may be of anything they've done in the last 8 or so years. 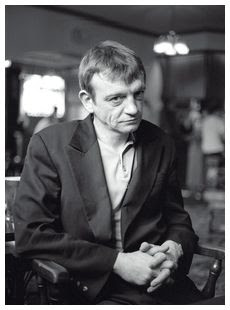 Late night internet searches can (duh) take you to weird places. You never know what you may stumble upon and how you may react to it. I had one such chance encounter recently, and it confirmed why once I gave my heart to this person/persons.
Whaaa???

The site was You Tube, the name I entered was The Fall. Yes, that band (person, really) that's one of a kind, really and truly. A genre unto themselves. One step in to the influence and you're already 3/4 of the way to obvious and unforgivable copycatdom.

The Fall. Born in Manchester, England in 1977, the brainchild of truly working class, truly original, literate speed freak/booze hound genius Mark E. Smith, possessor of little to no instrumental skills, then or now. 30 years later they still exist, M.E.S. being the only constant. No fewer than 40 people can say they were in The Fall, be it for 15 years or 15 minutes. Also, their 30-something albums have been on 20 something different labels. That's a lot of estimated figures there. That's a lot of lazy research on my part.

No hits (perhaps in New Zealand?), no arena shows, just a loyal following that ebbs and flows. Never heard them? Take early Pavement mixed with some early Pulp and maybe you might get somewhat close. They can't be replicated. I once heard a band at the Baystate in Northampton trying to pass off their own music as original, but it was such an unabashed, by-the-numbers rip-off, that I couldn't help but yell "Hip Priest!" during a between-song lull. Yes, I was that ass. But I just couldn't abide.

You can't really hum a bar of most of The Fall's songs, and often cannot decipher what Mark E. Smith is on about. After 200 listens to "Cruiser's Creek" (one of their only "hits", from 1985), I recently read it's about an office party in which a bomb goes off. I never knew and I kind of didn't care. Even when read, it's full of not even booksmart references, but in many cases, his own slang (no big wonder the oft-self-referential Mark E Smith wrote a song called "Slang King").

What influences M.E.S.? Well, they've covered stuff by classic country, soul, psychedelic pop and reggae artists. So it's all over the map. German hippie-art band Can was one precursor, though only up to a point.

My first encounter with them: my friend Todd, soon to be singer of That Cat, and then Sourpuss, was sitting in Dunkin' Donuts in North Andover, with a large coffee and a pack of Marlboros listening to headphones. He was the coolest person I knew at that moment. I asked what he was listening to and he said The Fall.
He rewound his walkman to a song he thought was a good starting point.
"C.R.E.E.P." came on--their first "poppy" single, produced by John Leckie (XTC, Stone Roses, P.I.L., Radiohead...). Simple, cute synth riff....then this guy talk/singing with a thick accent....
I dug it, but didn't really get it.

Months later, Todd and I were meeting for coffee and cigs on an almost nightly basis. One night he showed me a Fall video tape he just got.
It started to make sense. This Mark E. Smith guy was weird. Skinny, sarcastic, semi-unintelligible....the band was like a cult. Almost like a Grateful Dead for the post-punk. You were either on the bus or off the bus. You were drawn in or repelled.
I wanted to get on the bus after seeing this video:


NOTE: I was going out on a limb with the Grateful Dead comparison--the fact that neither band sounded inbred, spoke their own language, for better or worse-- but then was sent a link to this great video and saw I wasn't crazy or making imagined mental leaps:

And much like the Dead, when someone tried to get me into them via the slick Terrapin Station album, with its uber Cali-coked-out 1977 production, I didn't get it. It wasn't until I heard 1968's feedback-laden Anthem of the Sun that I understood.

And as such, the slick mid-late 80's Fall wasn't doing it for me. Then I was loaned The Fall's dark, trippy 1983 album Perverted By Language and I got it. I got where Pavement got some things, where Sonic Youth got some things..


I decided I liked best the early to mid period. 1979-84. Trashy production.  Pre sequencers 'n synth. More guitar/bass driven. And two drummers! And (after a while) M.E.S.' cute American (ex)wife Brix on guitar.

I got a job that summer delivering Boston Globes--250 of them--every friggin night/morning from 3-7 am. That summer I finally understood. Sudafed kept me going (for energy and not sneezing to death due to all the fresh newsprint) and Mark E. Smith was singing/talking about being "Totally Wired" and I was hooked. it was a surreal summer---Bowie's "Berlin Trilogy" being the other main soundtrack, as well as XTC's The Dub Experiements (and really, who listens to THAT except wired paper boys? at 3:45am?). The Fall album I bonded with during that job was 1986's Bend Sinister. Tell me the first track isn't the sound of driving at 3am on too little sleep

No wonder I returned to school on the verge of mental collapse that fall semester.

Aahh..so I've rediscovered the most indescribable of bands.

"But Brian, I thought you like melody and hooks and.."

I do, but there's something there...like, no offense to lots of people I know, but I will never get the appeal of Dire Straits. Much like you may never understand The Fall. But maybe you will.

Try these on for size:


So, yeah--he's a bit of a drunk and a tyrant, but his interviews are much less embarassing than say Andy partridge's (if you want to go the "eccentric limey" route)

Oh, and read this and this--they're excerpt from a new autobiography.
They explain a lot.
Posted by brian at 12:40 PM