(Keep reading to find a link to a specially prepared mix of Dylan and his heavy friends doing fun covers and odd rearrangements of his own songs...it's great listening.)


I have a few reasons why I didn't observe Bob Dylan's 70th Birthday, either in real life or on this blog.

1) I find myself wishing a lot of people belated happy birthdays, so why should Bob be an exception?
2) Didn't you get enough hype without me adding to it?
3) May 24 was a day before I had hernia surgery and so I was just trying to not stress out. Too, I was told not to eat or drink after 11 pm that night, and any real rock and roll birthday observation shouldn't start until at least midnight.

So there are some lame excuses. But here's one very legitimate reason: nothing I write on this blog seems to (nor, let's face it, should) be of real relevance to anyone, and so, writing about Dylan on his birthday would just be too relevant.

Forget the subjective and fanatical tags of poet/sage/prophet/spokesman.
I'm going to salute him by writing a bit about Bob being, above all else, just a guy who loves to play music, be it his own or others'. This model has more recently inspired such folks as Elvis Costello, Richard Thompson, Robert Plant and Robyn Hitchcock, all of whom, besides being prolific songwriters, love to pay tribute to those who have inspired them. As a drummer, I can say, it's always a treat to play with people who just know how to play a million songs. It's sort of bringing the jazz/blues tradition to rock and roll, and thus allowing it and its artists to age gracefully.

So the following Dylan Mix consists of mainly covers, but some of his own tunes, recorded at three different times, accompanied by three different heavyweight bands. The songs are arranged non-chronologically to stress the fun of it all and continuity-in-style of Dylan as an interpreter. The three sessions are: 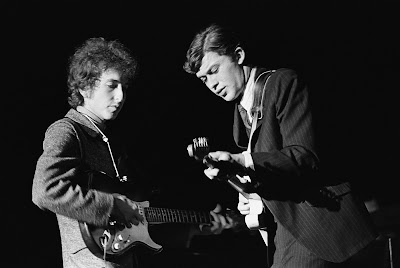 1) Dylan with The Band--1967, Woodstock, NY. The source of the famous (and recently written about on this blog) Basement Tapes, the culled songs here are all fun cover tunes. Mainly American folk and early rock and roll. Early rock and roll covers can often be cause for a yawn and eyes rolled skyward, but in Dylan's hands, you always know it's just gonna sound odd in a good way. His voice is evolving, or rather is recovering from the narcotic/tobacco wheeze of '66; and on one of the songs you hear what may be the birth of his syrupy Nashville Skyline voice, which he wouldn't use on record for another year and a half. 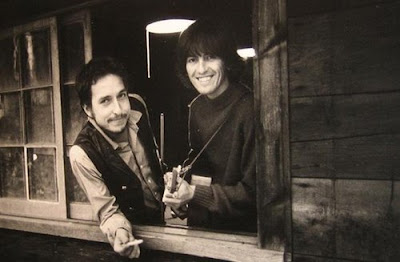 2) Dylan with George Harrison, and ???--There are a few theories about these songs. Some say half are from '69 and feature Carl Perkins and Johnny Cash. I'm of the same opinion as those who believe all these songs are from the same session--May 1, 1970 with George Harrison on guitar and backing vox. The rest of the band is in question--why, I don't know. I've seen Russ Kunkel on drums, Leon Russell on bass, Charlie Daniels on bass, Al Kooper on piano, Bob Johnston on piano...a few others--pretty sure they weren't all there. In any case, Bob and George are having a great time. Fun covers and some VERY COOL reworkings of (then) semi-recent Dylan songs. It must have taken some goading from Dylan-nut Harrison, but Bob not only does some deep cuts from '64-66, but is back singing in his natural voice--not the odd syrupy put-on of Nashville Skyline. 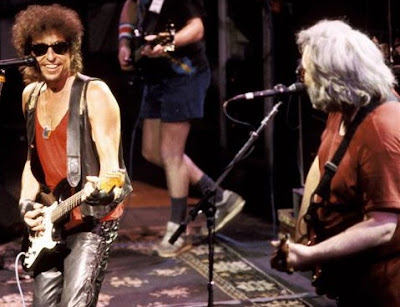 3) Dylan and The Grateful Dead--spring, 1987. Yes, the subsequent shows weren't good. The Dead had more or less sobered up in the wake of Garcia's recent near-death, while Dylan, finding his way through an alcoholic haze of self-doubt, was all over the place--though having a good time upon discovering that he and the Dead were cut from the same cloth. The rehearsals here, written about in Chronicles Vol 1, went from Dylan almost quitting early on, basically in fright and intimidation--after all, the Dead knew his songs better than HE did-to Dylan and the Dead having a grand old time--heard here--going deep into their shared history and Garcia getting out the banjo and pedal steel for the first time in years. Dylan even plays mandolin. It's a total continuation of the other two sessions. Pressure free, full of laughs and the love of music just pouring out. Unfortunately, by the time of the tour a month or two later, Dylan was up to his old tricks, calling out songs they hadn't rehearsed, changing the keys of songs, forgetting beginnings and endings...and you kind of don't want to do that with The Dead, who had hard enough time with those things anyway...

Something I'll point out is the way I've arranged them. There are two songs that Dylan does, 20 years apart, so I've out them back to back--"The French Girl" by Ian and Sylvia and "Folsom Prison Blues", by Dylan's long time friend, Johnny Cash.  So you get to hear how both the Band and the Dead treat each of these tunes. I've also made sure to include songs that Dylan was doing in 1967 which in the coming years would become lifelong stapes for The Grateful Dead: "Goin' Down the Road Feelin' Bad" and "Big River" (another Cash tune). Deep roots. Oh, I believe The Dead were known to do "See That My Grave is Kept Clean" waaay early on, like when they were The Warlocks.

One last thing: I like comparing/contrasting the roles of lead guitarists Robbie Robertson, George Harrison and Jerry Garcia in each of these. All three were admirers of Dylan and wanted nothing but to please him. I find the biggest similarities to be between Harrison and Garcia. Partly because of their playing but mostly because they both seem to love singing with Bob--the hit and miss harmony, the good time shouting, and all else in between.

Two of the three sessions are interesting because they were recorded at two out of the three time periods that Dylan covers in his memoir.
If you've not read this book, I highly recommend it. He chose to cover three years--1962, 1970 and 1987--that represent periods in his career that he really had no clue what his next move was going to be.
In each of these cases, he just had to stop pressing the "genius" button and go with what he loved--and what he's been riding out this final years doing: having a good time playing music with friends.


Listening with headphones is recommended for the before/after song chatter.