Are you like me? Do you wish you were playing music right now, but can't because you had a hernia operation a few days ago? I thought so. See? We're a lot alike. I knew that the minute I saw you.

These fancy-free, pain-filled days of recuperating, I have no idea how I'll feel physically when I wake up, or what will strike my fancy to while away the hours. Today, my first thought was "I feel like reading an interview with Charlie Watts". 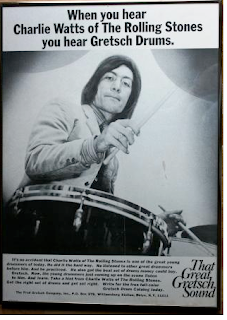 One thing led to another and I discovered a site I never knew of before, which has a treasure trove (I've never used that term) of exclusive interviews.

Some good bits, in case you aren't recuperating from a hernia and don't have the time to wade:


Jimi Hendrix (Jan 1967): ...it’s so embarrassing, man, when America is sending over the Monkees – oh, God, that kills me! I’m so embarrassed that America could be so stupid as to make somebody like that. They could have at least done it with a group that has something to offer. They got groups in the States starving to death trying to get breaks and then these fairies come up.


(Where's That Sound note: hee hee! little did he know he'd be touring with them 6 months later!)

Jimi Hendrix (November 1967):
Q: What do you think about the commercial pop scene right now?

A: [Simulates a confused stutter] Well, have you heard the Marmalade and their record “I See the Rain”? I don’t understand why that wasn’t a hit.

(Where's that Sound Note: I don't either. But Matthew Sweet and Susannah Hoffs covered it a few years back, which was a cool thing to do. Here's the original...)


Charlie Watts (1994):  Ginger Baker was a much better drummer than John Bonham, if you really want to know about drumming. Ginger Baker is the best drummer to emigrate out of England.

(I) Can’t count, really. I must be one of the few drummers in the world who make a living at it who can’t take what’s called “fours and eights.”

Lastly, speaking of rock and roll architects admitting that they're merely talentless hacks,

Q: Are you satisfied with your accomplishments and your career?

Q: Why do you think you’ve attracted such a loyal following?

A:  ...I blame the general low quality of life, you know.

Note:
The Garcia article may be the best (with him) I've ever read. Not only is he living in a friend's basement, and has cocaine dust on his tshirt (visible in the cover shot -!!-), but, unbeknownst to him, he's days away from 1) the band holding an intervention in that very house and 2) getting busted for freebasing in his BMW in Golden Gate Park.
Nontheless, the interview is fascinating, with Jerry giving his views of everyone from Django to Dire Straits to Van Halen, his personal strengths and weaknesses (mostly the latter) and lots of guitar-dork talk that means little to me.
Also, you see the charmingly self-loathing personality with the world on his shoulders that really is the perfect recipe for a bad substance abuse problem. Check it out.


* The bunny quote is from the November 1967 interview with Jimi Hendrix. Awesome.
Posted by brian at 8:45 AM