Nez in Nashville, Nez in Byrdland.


Many of you have probably seen this famous clip from the second-to-last episode of The Monkees (filmed in late 1967). It's 100% awesomeness, and probably the hippest thing to be found on any of the episodes.
About a minute in to the clip comes this exchange:

Wait! DID Nesmith Join The Byrds? (Depends on what you mean by "join")

"...as far as I know, I never laid eyes on the man (Gram Parsons)...
I played with those guys a little bit, Roger and those guys, when they were doing the Sweetheart of the Rodeo tour, but that was as much interaction in the L.A. country rock music scene that I had. All my country stuff came right out of Nashville; that’s where I was doing it. I’d go to Nashville and play there."
--Michael Nesmith, from a 2006 interview

In this recent book about the Flying Burrito Brothers, there is a passage that discusses the one concert in which Nesmith did in fact sit in with the Byrds. Long time music journalist Jim Bickhart, who was working with The Byrds at the time, says he witnessed this show, and gives the date as August 3, 1968 and the place as The Berkeley Community Theater. He says he saw Nesmith "playing mostly steel and regular electric guitar, as I remember....he was having a great time". He also notes the irony of hearing the Monkee playing "So You Wanna Be a Rock and Roll Star", the song often (wrongly) thought to be about The Monkees. Bickhart also says this was his first time seeing Clarence White with the band. Gram Parsons had left the band only weeks before. (Chris Hillman notes in the book that he has no memory of Nesmith ever playing with The Byrds.)

This would put this show somewhere between the end of filming the Monkees' movie Head and the beginning of the Monkees final tour as a quartet, where they played Japan and Australia.

“I played steel guitar and rhythm guitar for the Byrds at a concert in Berkeley, California. People asked me if my amps were turned on, you know? Did I really play or was it all for show? The Byrds certainly didn’t need me to stand around on stage and do nothing. Clarence White asked me not to get in the way of his solos, but the rest of time I was as audible as anyone on stage.”
--Nesmith in Folk Scene magazine in October 1975.

So was this just for fun, or sort of an audition? I do wish there were further examples of Nesmith's pedal steel playing beyond the elementary stuff he does on The Monkees' Headquarters album. Apparently, by 1968 he knew enough to play the Sweethart of the Rodeo songs. 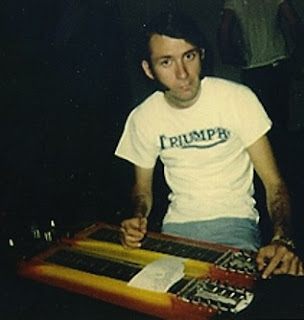 It's too bad they didn't throw in a Nesmith tune.
"Aunties Municipal Court" would have fit nicely...


The Scattered Legacy of a Reluctant Country Rock Pioneer

Between May 28-June 2 1968, Nesmith spent some time in Nashville, employing many of the same session guys that The Byrds (and Dylan) used on their country forays.

You can read an article about the sessions and some, er, blunt, quotes from banjo player Sonny Osborne HERE.

According to this excellent book by Andrew Sandoval, Nesmith recorded nine songs while in Nashville (and apparently took one day off to "enjoy the nightlife in NYC"--?--)

If one makes a playlist, these nine songs make a very nice, if short, collection. I'm sure no one would have me killed if we threw in

which were recorded two months before in Hollywood, with Chip Douglas on bass and Red Rhodes (who would play with Nesmith on and off for the next 25 years) on pedal steel. Also, it's good on these to hear Nesmith handling all the guitar work, since on the Nashville stuff, he mostly let the pros do the work.

Unfortunately, only a few of these songs were released during that time, and they were sprinkled lightly among Davy and Micky songs on The Monkees Present and Instant Replay, both released in 1969 when the Monkees were already last week's news. The rest came out on Rhino's excellent Missing Links 1-3, released in 1987, 1990 and 1994.

I will admit to writing Andrew Sandoval and suggesting that Rhino release a collection containing only the Nashville '68 songs, and maybe, being Rhino, find some outtakes and other goodies. I never heard back. I even suggested a gimmick: release it as though it came out in 1968-69, launched Nesmith's solo career and was met by rave reviews from his peers (Parsons, McGuinn, Stills, Garcia, Neil Young, Dylan) and thus, the "hip press". By now, you know my fondness for musical historical fiction.

Well, if they won't do it, then I'll make an iTunes playlist. Dig It. Download it even.

Email ThisBlogThis!Share to TwitterShare to FacebookShare to Pinterest
Labels: Michael Nesmith, The Byrds