I'm a Believer.. He's a Deceiver. The Lies of Neil Diamond.

You know, know, know, oh lord have mercy how you know that I love the Neil Diamond.
Some reasons I love Neil Diamond:
--Hot August Night (1972). He's out of fucking control, and comes off as a little bit nuts when he's talking to the "tree people"...followed by an awkward silence...and he mutters "are you still there, tree people?" (in actuality, he's addressing those without tickets who were camped in trees outside the amphitheater. But it's fun to imagine that he's just losing his mind).
Because five minutes or so into the Soolaimon>Brother Love's Salvation Show, he DOES lose his mind. Listen.

That is a rock and roll scream to rival Roger Daltry and Jim Morrison.

I also love Neil because of beautiful, soul-soothing songs like "Stones", "And the Grass Won't Pay No Mind", "If You Know What I Mean" and of course, his tribute to his penis, "Longfellow Serenade" (don't look at me like that. read the lyrics).
I love that he allowed Rick Reuben to produce two records that found Neil writing his own songs and playing his own acoustic guitar for the first time since the mid 70's. They're good albums. Sparse, sad, tasteful. And I really really love that, if you look at Amazon reviews, quite a few of his "fans" found the alums "too depressing". Well look, you old hags, if you knew the real Neil, you'd know his life long battle with depression, his failed marriage, his twenty five year 2 pack a day cigarette habit...and lady, it's because of YOU that Neil Diamond has had to live a double life his entire career.

You remember the very funny Will Ferrell skit where Will is telling all those insanely dark tales as part of a Neil Diamond Storytellers? Well...I'm not saying that that was anything but comedy, but there does seem to be a pattern of deception.

I'll give a few examples.

Ok: it was supposed to be an ANTI POT song.
HOWEVER: the lyrics come across about as anti drug as Country Joe and the Fish's "Acid Commerical". The people interviewed in the song are talking about how speed, heroin or their dysfunctional families ruined their life.
So Neil, you get a failing grade for execution and songwriting and desired effect.
And now here comes THE DECEPTION:
Neil got busted for marijuana possession in 1976. He said he'd been smoking it since moving to LA from NYC in the early 70's. He says now "It made me stupid". Perhaps, but it coincided with his most interesting and melodic work.


3) Tired of the drug stuff? Ok.
Neil was famously the out-of-place guy in The Last Waltz, although I've always loved his performance.

He was working with Robbie Robertson at the time, and, though Levon Helm objected, Neil was invited along. His huge ego was not invited, however, it too came along. I've read that after he came off stage, Neil passed Bob Dylan in the wings and said "try to beat that!". Dylan said "Ok, all I have to do is go on stage and fall asleep!". ZING!!!
In any case, Neil has since played down his appearance in The Last Waltz, saying "I wanted to be home with my family (it was Thanksgiving), so right after my song, I went straight to the airport". Sounds cute and domestic, but....
Really Neil? Who's that dude in the blazer and the shades and blown dry hair who seems to have stayed until the grand finale at about 1 am?

4) This hits home a bit. Ronnie Tutt. A drumming idol of mine, even before I knew his name. Did you ever watch any Elvis Presley specials from the 70's and say "oh my golly, who is that mad man behind the double bass drum, just pumping so much energy into Elvis' performance?". That is Ronnie Tutt.
He joined Elvis' band in 1970 and stayed with it until the King's passing in 1977.
Check this out:


So that's 1976-77. Not sure of the exact date.
Who else was Ronnie touring and recording with at this time? 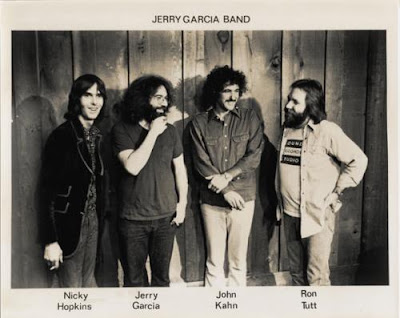 Sadly, there's no video of Ronnie playing with Jerry (or Nicky Hopkins, famous for his work with the Stones, Kinks and Who).
But here's one of those "audio only" vids of a pretty upbeat number with both Jerry and Ronnie shining. I very much like the very end because it reminds me of a game show.


So, my point. After Elvis died, Ronnie also split with Jerry, and eventually joined with, you guessed it, Neil Diamond! Nice career move. He probably needed to get away from the very different, but no less unhealthy freak shows that the Presley and Garcia circuses supported.
Now..I don't know how much Neil has to do with this, but on at least one Neil Diamond site, Ronnie's work with Jerry is wiped from history.

"On working with such legendary singers, Ron comments, 'If I had to narrow it down, the greatest music influences on my life would be Elvis Presley, Jerry Garcia and Neil Diamond. Elvis for the flashy, explosive, slightly out of control, style of playing that he brought out in me that mirrored his performance and personality, Jerry for his casual, laid-back, no hype, soulful style, but Neil has influenced me to be a disciplined team player. He leaves little to chance."
Now, on a Neil Diamond site, http://www.diamondville.com/NDRRT/Ron.html
the same quote, but one shaggy dog of a man seems to have been left out:

"On working with such legendary singers, Ron comments, 'If I had to narrow it down, the TWO greatest music influences on my life would be Elvis Presley and Neil Diamond. Elvis for the flashy, explosive, slightly out of control, style of playing that he brought out in me that mirrored his performance and personality. Neil has influenced me to be a disciplined team player. He leaves little to chance."

5) Last, but not least, the thing that got me thinking about all this. Neil recently released Dreams, An album of all covers, save one: a rearrangement of his own "I'm a Believer", of course made famous by The Monkees. I gave this new album a listen, and was very much looking forward to the final song, Harry Nilsson's "Don't Forget Me".

If you know and appreciate Nilsson, you know that he, like all of the best lyricists, mirror real life in their words by marrying humor with tragedy. That is life. A walk down the street offers things to make you cry with joy and with pity. A five minute news cast can play with all of your emotions. Nothing is all sad, nothing is all happy, no matter how you try to arrange things. Balance always occurs. Ok, Neil?
So when Harry Nilsson wrote "When we're older, and full of cancer/ It doesn't matter now--Come on, get happy!/ 'Cause nothing lasts forever/ But I will always love you"
That is just about as sweet of a thing that one lover (or friend) can say to another.
It's "Jesus Christ, some day, one of us is going to see the other die and it's going to be the most unbearable thing imaginable. But guess what? All there is is THE NOW, and look! You are the most most beautiful thing I've ever seen, and I'm seeing you right now, and god damn, this wine isn't going to drink itself, so let's enjoy it all while we're here!".
Right? Right? Nilsson knew the human condition.
Neil Diamond takes a walk through the Hallmark store at the goddamn mall, with its scented candles and flatulent senior citizens (that's a memory for my sister. we once heard an old lady totally fart in a Hallmark store and Alyssa said at first she thought it was a sax solo on the muzak)...
anyway...you know what Neil says?
"And when we're older/ IT'S HARD TO GET AROUND/ It doesn't matter now, come on get happy".
That's not only a cop out to the nth degree, it sounds like he spent all of 3 seconds thinking of it.

Instead of getting angry, I would now like to rest with the knowledge that Neil Diamond has to sing a word that most of us retired at the age of six:
"Song she sang to me/song she BRANG to me".

Neil, you can deceive us no longer. Not even with your bad English. The jig is up.
"But", as Harry Nilsson, and now you, sang, "I will always love you".
Posted by brian at 10:13 AM