The Changing Fortunes of the Four Headed Monster: a review of Rhino Handmade's Reissue of "The Birds, The Bees and The Monkees"

To any of my Facebook friends, or to readers of John Hendrickson's excellent "Born to Rock and Roll" blog, this entry will be a repeat. But for the rest of you, enjoy. I'm stalling for time while I move house, so please understand. This was written just about exactly a year ago, shortly after the BB+M Deluxe reissue.

As a 13-14 year old absorbing the mid 80's wave of Monkee Mania, The Birds The Bees and The Monkees (originally released in early-mid1968) was never on my list of top three Monkees albums. That list did, and always will, consist of "Headquarters", "Pisces Aquarius, Capricorn and Jones" and the Head soundtrack. (Missing Links Vol 2 is amazing as well, but is a collection of tracks from 1966-69 that went criminally unreleased until 1990.)

So, The Birds, The Bees and the Monkees (hereforth referred to as "BBM"). First off, after two consecutive albums that had kicked off with hip Nesmith tunes, this one started off with Davy Jones schmaltz, telling me to "get out of (my) dream world". What is he, my mom? Furthermore, I didn't need to hear Daydream Believer one more time, I was disappointed to learn that the flamenco guitar in Valleri was not played (only mimed on the show) by Nesmith, Dolenz hardly registered on the album (and played zero drums) and Tork, besides the piano lick he wrote in Daydream Believer, wasn't on the album at all.

Thus, my cassette copy was constantly being fast forwarded and rewound to the sonic, surreal oases that were the four Mike Nesmith songs: Tapioca Tundra (psychedelic latin jazz pop--?--), Auntie's Municipal Court (country psych blues right out of Notorious Byrd Brothers), Magnolia Simms (a catchy, scratchy, in-one-channel-only pastiche of 1920's 78 records) and lastly, Writing Wrongs, which vies for strangest song in The Monkees' catalog: Two slooow verses of opaque queries, a 3 minute breakneck instrumental that could be the soundtrack to a guy on acid running around crowded city blocks being chased by a robot, and then one final slow verse that somewhat answers the questions posed in verses one and two.

Now, Rhino Handmade has released a 3-CD expanded version of BBM and it's a whole new world. An alternate universe where, if the bonus/unreleased tracks are arranged effectively, one can envision an amazing album that still may not have won over the over-14 crowd, but at least would not have been such a bipolar mishmash of dead-in-the-water pop trash and forward-thinking pop art. And, which would have included several gems penned by Peter Tork.

So what happened? Well, despite their 1967 power-play of "more artistic control", the Monkees circa 1968 were still being marketed to the teenies, despite their shelf life nearing its end, and at least half the band just dying for artistic recognition.
Their individual personalities were worn on their (no longer matching) sleeves, and this, combined with knowing the TV show was going to be canceled and that they were about to start filming a very un-Monkee-like movie (Head), contributed to a chaotic scene in Monkee-land.

Individually, the four reacted in suitably different ways. Davy Jones sort of seemed unaware, or in denial of the fact that his perfect smile was being replaced by someone else's in girls' bedrooms everywhere. Micky Dolenz thought (in the immortal words of The Minutemen), "maybe partying will help", and hosted/attended endless parties in Laurel Canyon, running alongside David Crosby, Eric Clapton, Harry Nilsson, various Beatles and Jefferson Airplanes. But he forgot about improving his drumming and songwriting skills, both of which had developed at an alarming rate the year before; Peter Tork was at the same parties as Dolenz, but was never without a guitar or banjo, thus getting himself on George Harrison's "Wonderwall" movie soundtrack, and getting Buddy Miles and half the Buffalo Springfield to play at his Monkees studio sessions; Mike Nesmith didn't socialize much. Apparently he popped Ritalin, bought cars, put on his shades and psychedelic tie, wrote a million songs, fathered two kids in the same year--one not to his wife--made some laugh while royally pissing others off with his wit and arrogance. He went to Nashville and recorded an album's worth of songs (that should've been his first solo album, but he was still under Monkee chains) with the same musicians that Dylan and the Byrds used on their country albums..what he didn't achieve was respect from his peers and journalists as a musical force to be reckoned with in the fast growing world of sophisticated pop music. Zappa, McGuinn and Nilsson were all admirers, but few others.

So this box set. Why is it worth shelling out and then waiting weeks for it to arrive?
Let me compile an alternate Birds Bees and Monkees and then insert it into rock's alternate history as one of the best albums of 1968 alongside Beggars Banquet, John Wesley Harding, Anthem of the Sun, Bookends, Ariel Ballet, Big Pink, Electric Ladyland and the White Album. All these songs were not on the original BB+M, or if they were, I've mostly chosen alternate mixes. I've also stressed songs that featured the last of the Monkees' collaborating with each other before they became completely a band in name only. This album would have blown some minds.

Tear the Top off my Head (dolenz vocal)--one of Tork's best ever songs. Very Lovin Spoonful. Buffalo Springfield's Dewy Martin on drums, and Stills on guitar.

Tapioca Tundra (alt. mix)--one of Nesmith's trippy best. Fancy chords, straying from his usual default country folk progressions. This mix features some heroic drums not heard on the released version. His weird vocalizing at the end is equal parts singing, yawning and orgasm. Must have freaked out the 12 year olds.

Carlisle Wheeling--a lovely 3 verse Nesmith country tune, with Tork on banjo, in which he apologizes to his lady for not wanting to have sex quite as often as they used to . Or something like that.

Merry Go Round--a short Tork piano dirge lamenting lost youth. Scott Walker he is not, but it comes off ok.

Writing Wrongs--ok, this is the same version as on the album. But I just love this song. It's in its own world. It's almost 6 minutes long, Nesmith plays piano, organ and guitar and the middle bit is just pure repetitive, pre-Kraut rock weirdness. Should have been recognized in its time.

P.O. Box 9847--alternate mix with Micky's Moog. This fact is never circulated outside Monkee camps, but Micky Dolenz bought the third Moog synthesizer in existence, and put it on a Monkees album immediately ("Daily Nightly" and "Star Collector" from Pisces Aquarius..). He used it again on this song, but it was mixed out of the official release. This is a cutesy Boyce and Hart song, but not horrible. I like the added Moog.

Long Title: Do I Have to Do this All over Again--this may be Tork's best song. It's on the Head soundtrack, but was slated to be on BB+M. I remember someone once saying the guitar solo, when it goes into 3/4 sounded like the Dead and I was offended. But now I know, it does kind of sound like The Eleven.

My Share of the Sidewalk--Nesmith wrote this obviously Nilsson-influenced song. Davy sings, a little weakly, but it's in 5/4 and above his vocal range. He had a tough job. But it's a groovy number.

Lady's Baby--not the version with the annoying baby noises. This is not a great song, but Tork recorded it about 10 times, trying to perfect it. Apparently the sessions would end with people tripping, screwing, drinking and smoking, and the engineer turning off the machines and leaving. He's got his buddy Buddy and other buddy Stills on this one.

Magnolia Simms--Nesmith's faux 1920's megaphone song. I'd use the 2010 stereo remix. It makes one appreciate the song more. Earl Palmer on drums.

Zor and Zam--yes, this is a dated anti war song, and a bit embarrassing. But Dolenz sounds more like Grace Slick than Grace Slick.

AND, I'd include an EP of acoustic demos:
Nesmith's Tapioca Tundra, Little Red Rider, Magnolia Simms and St. Matthew;

lastly, Nesmith's demo take of My Share of the Sidewalk. He's definitely having a tough time playing piano in 5 and doing a live vocal take, but he gives the song an almost Rundgren feel, especially in the bridges. 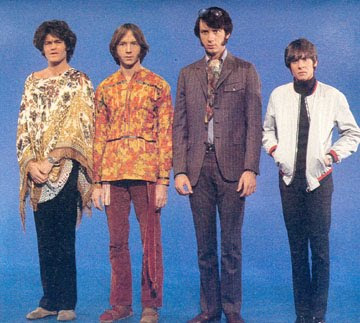 Email ThisBlogThis!Share to TwitterShare to FacebookShare to Pinterest
Labels: Birds Bees and Monkees, The Monkees