Shades of Deeeeeep Purple..and time travelling while in my teens 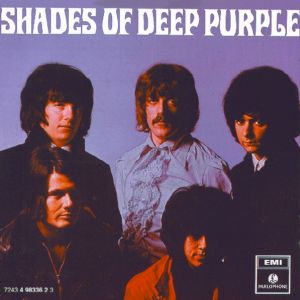 I'm not a fan (at. all.) of what Deep Purple became, but I'll always have a fondness for their 1968 debut album.

As an audio/visual presentation it all works perfectly. I love when that happens.
The artwork sounds like the music looks like the artwork....and all that synesthesia stuff. (I think the vinyl tastes like the music smells too...not sure.) It's all so purple, man;  Deeeeeep Purple!

In 1987-88, when I was a (voluntarily) reclusive 14-15 year old, happy to stay in my room as much as possible, listening to records (and practicing drums--no, I didn't go to parties or date girls. that waited another couple years 'til the braces and acne were gone--but I became a pretty good drummer!), I would wake up and say, for example, "it's late fall of 1968" and listen only to albums that were released around then

Jefferson Airplane's Crown of Creation (that opening shares a lot with "London Calling", no?)

The Stones' Beggars Banquet (I know, this is not on that album--same year though, and have you ever seen this kind of really boring but rare video????)

The Grateful Dead's Anthem of the Sun (Peter Banks, first guitarist of YES says this album--and probably mostly this song, was an influence on early YES--the stacked harmonies and arty touches)
http://www.slideshare.net/xian/please-forget-you-knew-my-name-secretly-influenced-by-the-dead)


and...
Shades of Deep Purple (love this song a bunch... it's really just mod pop with wah wah and heavy drums)

I'd go as long as I could without any outside human contact and just imagine that I was a teenager in 1968, listening to all this amazing new music. It was fun.

Of course, I'd do the same with 1966 (13th Floor Elevators, Love, Count Five, The Yardbirds' Roger the Engineer, The Beatles' Revolver, Dylan's Blonde on Blonde...) and 1967 (waaaay too many to mention).

I never really wanted to imagine it was 1969 because then I'd have to put on a fake beard and buckskin and some kind of cowboy hat and pretend I had the slightest interest in, like, farming and stuff. My sister was into that--I was not.
Posted by brian at 7:16 AM