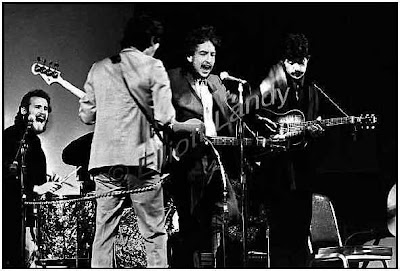 If pressed to name my favorite Dylan Thing Right Now, I'd have to say it's his performance of Woody Guthrie's "I Ain't Got No Home", backed by The Band,  recorded at Carnegie Hall, NY, Jan 20, 1968. A few reasons why it rolls my socks up and down:

--After having thought that I'd heard all the Dylan I needed/wanted to hear, I came across this song on a Band boxset just a couple years ago. I knew this concert happened, but for some reason (probably because no one ever talks about it like they do other Dylan things) I never sought it out.

--I love The Basement Tapes. The Dylan parts, not really The Band parts. And this is just a few months after those recordings, so it has that chemistry.

--I had the nerdy honor of playing this for a few Dylan freaks who also had never heard it.

--It really rocks. I'd seen pictures of this concert and assumed he and The Band were just folking it up. Not so. The chemistry of the 1966 tour is here. Dylan wails like his amphetamine old self, but is in fact a whole lot healthier, has filled out a bit and is looking like a hip grad student--not a broomstick with mod clothes and an afro wig.

Here he is singing the hobo anthem by his hero, but he only means it in cultural ways. Hard times would forever be a thing of the past.


Watch this video I made (and again, had to post on Facebook due to You Tube restrictions)

And now my essay on the subtext--and Dylan would of course be the first to poo poo it, and that's why we love him. He invites analysis and then says "you're wrong, you're crazy, you think too much and you're wasting your valuable time here on earth." Well, I'm no Dylanologist--I just really dig this performance.

So, 1966--Dylan finishes his world tour with The Band. He's exhausted. He looks and sounds like hell. He's completely dependent on chemicals to bring him up, down and and keep him sharp and mellow and witty and creative and Dylan-ish. He's got a brief vacation before his slave driver manager Grossman wants him back out on the road/in the studio, etc.

Who knows how serious the fabled motorcycle crash of '66 was? Either way, it was good timing, because Dylan would not have survived much longer at the rate he was going. So, the western pop music world gets psychedelic while he hides away in Woodstock, recuperating/detoxing, settling down with his wife, reading, writing, whatever. Staying away from the parties. Meanwhile, psychedelia would not have happened without him.

"The ghost of electricity howls in the bones of her face"
and
"Jewels and binoculars hang from the head of the mule"
(both from 1966's "Visions of Johanna")
are more definitively psychedelic than 98% of the stuff that the class of '67 was coming up with. He could sit out this Summer of Love game. In fact, he could spend all year on the disabled list.

Not many knew what he was up to, but it turns out he was hanging out with his buddies in The Band, coming up with the tunes heard later on The Basement Tapes. Some strange tunes that still had some trippiness in them, but were slowly getting reacquainted with reality.
That's a whole other subject, and it's been written about a lot.

So 1967 comes and goes. The game has changed. Dylan's hero Woody Guthrie dies after a long, not-pretty illness. A tribute to Woody is scheduled for January, 1968. Bob Dylan is asked to be a part. He accepts.

The guy who takes the stage looks nothing like the guy on the cover of Blonde on Blonde. This Dylan is bearded, his hair is short and his eyes are focused. The Band looks a little more hippie-ish, but that's because they were about to become The Next Big Thing.

I AIN'T GOT NO HOME

Well, listen again.  Dylan is not the strange, honey-voiced crooner he pretended to be a year later on Nashville Skyline. The angry, nasal rasp is still the sound that comes from his mouth. He wails this song like he means every word. Especially the chorus, on which he's joined by The Band. Nice solos by Robbie and Richard, too.

Perhaps it was the emotion of paying tribute to his now deceased hero. Perhaps it was the excitement of returning to the stage after 18 months. But I have a deeper, possibly bullshit, but fun-to-explore reason why Dylan's performance of this song is so emotional.

Dylan in January 1968 bloody well MEANT IT when he shouted "I ain't got no home in this world anymore". In 18 months, the world of arts and music had gone technicolor. He was an architect of it, but sat out the unveiling.

Dylan had no home in the post-Sgt Pepper world. Didn't want one.

Dylan also had no home in the world to which he was finding himself singing on January 1968. It was Woody's world. IE, the folkies he had so royally given the finger to at the Newport Folk Fest just two and a half years before. He'd gone electric, sided with the pop/rock world, got his leather jacket and polkadot shirts, and didn't look behind.

Now, on this day, he realized...he was neither tripping in meadows discussing god with the hippies, nor was he plotting the worker's revolution with the old guard--the protest Bobby. He in fact, was about to release John Wesley Harding--his record full of 3 minute religious parables (and a catchy love song), recorded with a pretty funky Nashville band--the same band who recorded Blonde on Blonde, and which was now wondering where all the 8 minute songs went.

In fact, the only home that Dylan did have was the only kind of home that he'd NOT known for most of his life of a musician--a quiet home with a wife and kids waiting for his return.