Most of these things aren't news to the average Harry fan, nor am I giving much away to anyone who's still waiting to see the "new" Harry documentary. These are just things coming to mind as I listen to a Nilsson mix I just made for my friend. And just may provoke the uninitiated to want to check him out.

I won't bother numbering the obvious one that's taught on the first day of Nilsson 101:

--He didn't write his two biggest hits (Without You, Everybody's Talkin'), and his biggest writing hit (One (is the Loneliest Number) by Three Dog Night) was written by, but not performed by him (the hit version, anyways). And perhaps his two most popular songs that he did write and sing (Lime in the Coconut and Jump Into the Fire) are far from his strongest efforts. He was just that hard to pigeonhole. Typical for a Gemini with, I'd guess, a large case of ADD. 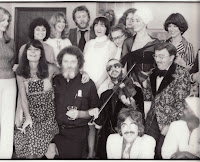 Anyway, here's my list, written as I listen to this mix--which rules. My friend will be psyched.

1) Lyrically, he's 100% unpretentious. Perhaps because he often wrote his lyrics barely an hour before recording vocals. So the words are from the heart, not over-thought. Not saying one technique's better than the other--just it's more befitting of him. Thus, you get the throw away line followed by the "wow" , tearjerker gem, followed by the joke that seemed funny at the moment.. But all so beautifully sung, you don't care a bit. And it's more true to life. The changeable emotional weather of each day. People say profound stuff, people say dumb stuff. People say stuff you don't think about or understand until 3 days or 3 years later.

2) Many examples of singing his heart out to his lady, then looking over his shoulder and including a line or two for his buddies waiting for him at the bar, just to let them know he'll get back to them later and that he's not turning into a total sap (to wit: "Don't Forget Me" and "I'd Never Thought I'd Get This Lonely").

3) With the exception of one person (Mark Mulcahy), I can't think of a single person who can approach Harry's voice: timbre, infllections, expressiveness etc. His voice was an instrument they only made one prototype of. Mark somehow came across the blueprint. But the average person just can't do even a bad Nilsson, the way you can sorta imitate other singers, however poorly. I sing along, then I stop and curse my monotone--Usually at the line "I could say I'm sorry for a lifetiiiime..." in "I'd Never Thought I'd Get This Lonely".

4) He loved hanging out with his kids. He loved being a dad, so much.
He loved his (third) wife so much. (this all despite never quite not giving up his taste for inhuman amounts of booze/coke/cigs).

5) Unlike so many out of control pop star bios (Morrison, Moon), people seemed to take Harry's antics, more or less, with good humor, instead of looking back in anger/bitterness. That's what generosity, sincerity and a big heart will get you.

6) Harry never wanted to be surrounded by myth/mystery--his life was an open book. This is perhaps why he never hung with, say, Dylan or Van Morrison. Cared not a thing about about being seen as hip or cool or the smartest guy in the room. Thus...was very hip and cool and smart. Like another bearded, overindulgent music legend who passed in the 90's (Jerry Garcia), Nilsson traded a formal education for life experience, thus becoming an expert at absorbing knowledge everywhere he went and being able to talk about anything to anyone, for a long, long time--be it a lawyer, physicist, or a guy on the docks.

7) If there wasn't a joke in there somewhere, it wasn't worth anything. This could be seen as a defense mechanism, but I can relate to wanting to leave 'em laughing, even as they're still teary eyed.

8) On their TV show marketed to 11 year olds, The Monkees performed a rather derisive and tragic song that Harry wrote, about a virginal girl's sad adventures with some not so innocent boys . But put it in Davy Jones' hands and you'd never think twice about the line "you're not the only cherry delight that was left in the night and gave up without a fight". But that's about as dark as it gets. Or, "You're not the kind of girl to tell your mother the kind of company you keep". Sad.

9) I bet a reformed Beatles could have happened in 1974, with Harry in place of Paul. It would have been a druggy mess, but no fights. Probably no album either. Definitely no tour (Harry never toured).

10) For his follow up single to "Without You", a song which put him on every housewife's radar, he sincerely offered up a very catchy song which had the phrase "fuck you" about 25 times. And refused to change it. Obviously, it wasn't a single. But took him off the MOR radar immediately.


Bonus: it's stated in the movie what an insecure guy he was, in his relationships. this is no spoiler if one notes that he has song titles like "Don't Leave Me", "Don't Forget Me" and "I'll Never Leave You". The thing is, he wrote "I'll Never Leave You" about a year before leaving his second wife.

Insecurity is also seen as a reason for his never touring.

But I think the whole package could be a diagnosis of some serious ADD. It has all the hallmarks. On the touring front, I think that the thought of doing the same thing night after night would have been torture--and he wasn't about to do a totally different 10 minute scat/whistle solo in every song each night just to keep himself from getting bored. (you see in the documentary, even in his couple of live TV performances, he always has to change his phrasing, his scatting, etc....never the same thing twice)

But on other fronts--the impulsiveness, easily bored, hiring and firing producers, never returning to past formulas, the showing up for day one of sessions without any finished songs and writing them an hour before recording them, the making each take a little different from the last, the never quite growing up/assuming responsibility (until he was simply too unhealthy), the having been a poor student, the fondness for stimulants etc etc (self medicating)...

Now a couple thoughts on the documentary:

1) Professional journalists have been giving it only OK grades. but folks I know who've seen it, love it. What gives? I think the journalists are letting form have just as much pull as content, and that is LAME. Yes, the look is low budget. All the effects could be done on iMovie. BUT, getting interviews with a dozen reclusive musicans (Jimmy Webb? Crazy!), BIG name actors (Robin Williams? How'd they get him?) and two of his wives just shows that much more energy was put into the content and emotion than making it flashy.

But I do have a couple of my own complaints...

2) What's up with producer Richard Perry mentioning The Beatles in some way in EVERY ONE of his many interview segments? He even says "I don't normally say things like this.." at one point, before mentioning, you guessed it, The Beatles.

3) Everyone seems to agree with Harry's opinion that the line "..but I guess that's just the way the story goes" in "Without You" is a lousy throw away. I think it's the perfect expression of the accepting, resigned sigh of someone who feels they lost at love.

4) And to compound that with Badfinger (who wrote "Without You") being referred to as "some band" by Nilsson and "a Beatles rip-off" by Richard Perry....jeeze. Pete Hamm died for your sins, people.

5) They spend NO time talking about Knnillssonn, released in 1977, which Harry said toward the end of his life was his personal favorite. It was his last consistent album of all original material, and the last album his voice is strong throughout.

6) Watching the doc on large, flat screen underscores the rock and roll lifestyles that many of the interviewees once led. Not always pretty. Except the dude from the band America. He looks easily 20 years younger than his true age--and not in a plastic surgery kind of way.


Ok then. If you haven't yet, think about renting, buying, borrowing or Netflixing "Who Is Harry Nilsson....".

I myself would like to thank my friend and musical cohort Henning Ohlenbusch for getting me into Harry Nilsson, oh, 15 years ago? Something like that.

In fact, if I had to guess, I think the very first time I met (and played music with) Henning, it was in a basement in Florence, MA and the first song we ever played together, along with Matthew Zapruder and Lord Russ, was Nilsson's "Me and My Arrow". Neato.